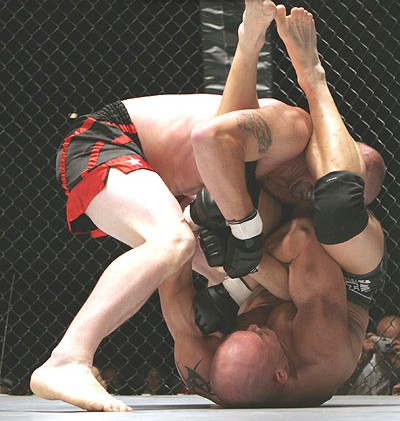 History
Back in the early 1990’s all fighting styles were brought together for the Ultimate Fighting Championship. The UFC is a no holds barred competition and fighters representing: Kickboxing – Karate – Boxing – Taekwondo – Jujutsu – Kung Fu – Sumo were all there to prove their style was the best. On that night Jujutsu rained supreme and suddenly the world was woken up to the necessity of grappling & ground fighting. Jujutsu then went on to dominate all Mixed Martial Arts events during the nineties.
Mixed Martial Arts is the new phenomenon sweeping the world, as it is now a well known fact that fighters who employ a range of striking, grappling and submission tactics are the most successful competitors in Mixed Martial Arts events and on the street.


After the Jujutsu domination of the nineties, all no holds barred fighters started to learn both the striking & grappling arts. Now the Ultimate Martial Artist was born. A Mixed Martial Artist is not just capable of fighting standing up, they are also capable of fighting in the grappling position and on the floor making them almost impossible to be beaten by a single styled martial artist.  Mixed Martial Arts is the ultimate in un-armed combat, it’s not limited by one way and it’s not held back with useless techniques that just don’t work. It’s reality for a real world.